Have you ever wondered why January 1st is the first day of the New Year? 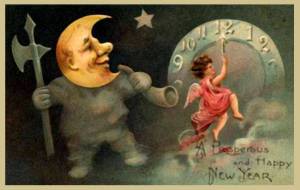 Our present everyday calendar is pretty much taken for granted, and it works fairly well. It has 365 days in it (more or less), given the adjustment of an extra day every four years (more or less). Most people know that the two equinoxes and the two solstices (natural events) fall more or less within a day or so of the same date each year, so it must have some synchronization with celestial events.

Many people may also be aware that the present calendar used by most of the world (and there are still some others in use, by the way), is called the Gregorian Calendar, and they may even know that it’s named after Pope Gregory XIII. As readers of the Pine River Observatory blog, I hope you might already have that information! But did you know that the Gregorian calendar was created by one of the most respected astronomers and mathematicians of his day, and that one of the largest craters on the moon is named in his honour?

I’m getting ahead of myself. First, we have to consider the matter of calendars themselves, what they do, and then we can see how January became the beginning of the year we now mark.

The earliest antecedents of today’s calendar can be traced to Italy roughly 3,000 years ago, with a calendar consisting of ten months of around 30 days each, which began each year in March. About 700 BC January and February were added to the calendar, making the Roman Calendar. About three hundred years later, January was designated as the first month of the year – and thus we have the first of January being considered as the beginning of the year – around 450 BC. Further adjustments were made up to 46 BC, but the passing of the seasons – and the “annual” cycle of the sun – still didn’t align with the calendar. Julius Caesar instigated a further refinement by the astronomer Sosigenes of Alexandria that brought things closer together. This calendar, the Julian Calendar, was aligned only to the solar year. Any attempt to synchronize the annual calendar with lunar cycles was abandoned.

For something close to 1,600 years the Julian Calendar was used by the western world. However, by then errors had accumulated to the point where the calendar date of the equinoxes had crept forward by 13 days, seriously throwing off things like the Christian celebration of Easter. Pope Gregory XIII put into motion the reformation of the calendar in 1582. A Jesuit astronomer and mathematician from Germany, Christopher Clavius (1538–1612), was the person responsible for working out the details of the new calendar. It worked much better than the Julian Calendar in matching up with the solar year’s accounting of days, and it’s the calendar we still use. However, it was not universally adopted; it was another 200 years before it was taken up in England and he United States, for example. And, there are other calendars still in use in various societies around the world, and for various purposes.

Both Sosigenes of Alexandria and Christopher Clavius are memorialized in the names of craters on the moon.

Crater Clavius is in the southern highlands of the moon. At 230 km across (and with 18 associated smaller craters) Clavius is one of the largest craters on the moon; remembering for whom it was named is a link to the story of the calendar most of us use today, 430 years after his re-alignment of the days of the year. Crater Sosigenes (17 km across) is located along the western edge of Mare Tranquillitatis (as are three satellite craters, Sosigenes A, B and C), to the east of a larger crater named for Julius Caesar (90 km, with 10 smaller associated craters). Rimae Sosigenes, a lunar rille, stretches to the east of the crater. Apollo 11’s lunar module landed about 280 km south east of this area.

Information on the history of calendars: Kaler, J. B. 1996. The Ever-Changing Sky: A Guide to the Celestial Sphere. Cambridge University Press. Cambridge, UK. Pg 174-175.