This summer I’ve been delving into solar studies. Perhaps it’s like the proverbial goldfish not noticing the water that surrounds him, but I really hadn’t paid much attention to our nearest star. Last year I did start to take my own look at the sun, using solar filters on an old 80mm f15 refractor, and that was pretty interesting. Somehow the solar bug has really bit me this year.

I’ve added some equipment to Pine River Observatory this year, and that’s helped. In addition to my Meade ETX 125 Terabeam telescope, which I now have equipped with both a Kendrick Astro Mylar solar filter and a Baader Planetarium continuum filter, I picked up a Coronado 60 mm Solar Max II BF15 Hydrogen alpha telescope a couple of months ago. The upshot of all of that is that I can take a look – and am starting to photograph – the sun at two quite different wavelengths, corresponding to different structures on its surface.

There’s an interesting feedback loop here. As I’ve been able to see the sun for myself, and consider how to take photos, and even explain what can be seen through a telescope to others taking a look, I’ve found that my curiosity has risen. I’ve been reading more, seeking out a deeper understanding of what I’m seeing. That in turn has made my observations a little better, I think, and certainly has meant I’m doing a better job of interpreting for others.

It’s also been exciting to see that there’s a lot happening in terms of science and solar observation right now. Consider these three news items from the past month alone:

These are just examples of the activity around solar observations in the past little while. The more I’ve read, too, the more I want to find out. The sun is quite addictive! More postings to come. 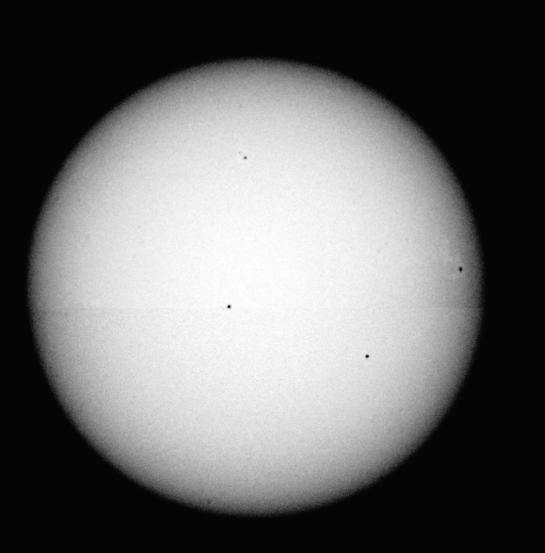 The sun’s “surface,” or photosphere, photographed from Burlington, Ontario’s LaSalle Park Marina on the morning of Monday 5 August 2013. This image was captured using a Meade ETX 125 TB telescope equipped with a Kendrick Astro Mylar solar filter and a Baader Planetarium continuum filter. These filters produce a green image that highlights contrast around sunspots and solar granulations. The image is a mosaic of two shots taken with a Nikon D5100 at prime focus, as the image produced by the telescope is larger than the D5100’s APS-C-sized sensor. The image was processed with Paint.net, a free image processing program. Although we might think of the sun as a big ball of hot gas it’s structure is much more remarkable than that. At its core the density is enormous – a liter of the gasses would weight 150 kg. At the surface we can see, as in this photo, the density is less than 1% of that of our own atmosphere at ground level.