We’re very used to having great photos delivered by our digital cameras these days. Point and shoot is the order of the day. Astrophotography is a little different, because of the tiny amount of light involved, and the specialized, custom nature of the photographic and telescope equipment.

I thought an example might indicate what I mean. The image below is of Bode’s Galaxy, M81, which is a large, bright galaxy close to us. I set up the Rigel 37 cm telescope in the Sierra Stars Observatory Network (http://www.sierrastars.com) to take five shots of M81, each one being a five-minute exposure. I then used software to combine the images, and to adjust the contrast and brightness of the resulting “stacked” image. These sorts of images are taken with monochrome cameras – or black and white – that are sensitive to all frequencies of visible light.

Here’s what the “tuned up” image of M81 looks like:

A processed image of Bode’s Galaxy, M81, created by stacking five 300 second exposures taken with the 37 cm Rigel Telescope in Arizona. This bright galaxy is relatively close to earth and can be located on a clear night with binoculars or a small telescope in the constellation Ursa Major.

Here’s one of the five original 300 second exposures, displayed more or less as it looked when it was delivered by the telescope and camera. The fine details of the finished image are in there, but in order to see them the brightness and contrast needs to be “stretched” a bit. This process changes the relationship between the light values recorded by the camera and the shade of gray displayed on the image, to show the fainter light of the outer edges of the galaxy. 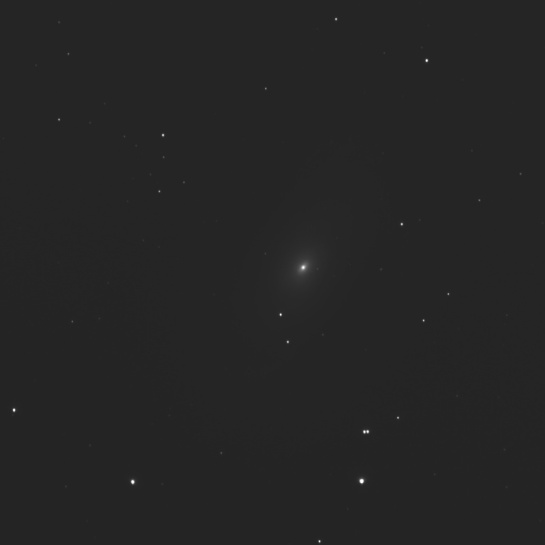 An unproccessed frame of M81, one of five taken as a 300 second exposure without filters on the Rigel Telescope in Arizona on the evening of 15 April 2013.

I’m feeling a little more confident about monochrome images now, but I still need to update my computer for doing this sort of “Post-Processing.” My next step will be to take some images of M81 and other objects with these remote telescopes using colour filters. By shooting images with colour filters on monochrome cameras like those on this sort of telesope, you can reconstruct a colour picture in post-processing.