For International Astronomy Day (20 April) 2013, I decided to try the 61 cm f/10 Optical Mechanics Nighthawk CC06 Cassegrain telescope at the Sierra Stars Observatory in southern California to photograph M51, the Whirlpool Galaxy. M51 is relatively close to earth as galaxies go, and is a beautiful deep space object. It actually consists of two colliding galaxies.

To make this monochrome image, I took three 300 second exposures of M51 with the 61 cm telescope, and then used free software called FITSWork (http://www.fitswork.de/software/softw_en.php) to merge the three FITS-format images files. FITS files include both the image produced by an astronomical telescope camera and all of the data about the telescope’s position during the exposure. The combination of images reduces noise produced by the camera and effectively turns the result into a 900 second exposure. I then tuned up the resulting image for contrast and brightness by adjusting “levels” with Photoshop Elements 6. I feel I’m getting a little better at image processing, but I still have a lot to learn! It’s fun, though, and the remote observatory option is a way of taking your own images even when the local weather makes any stargazing impossible. 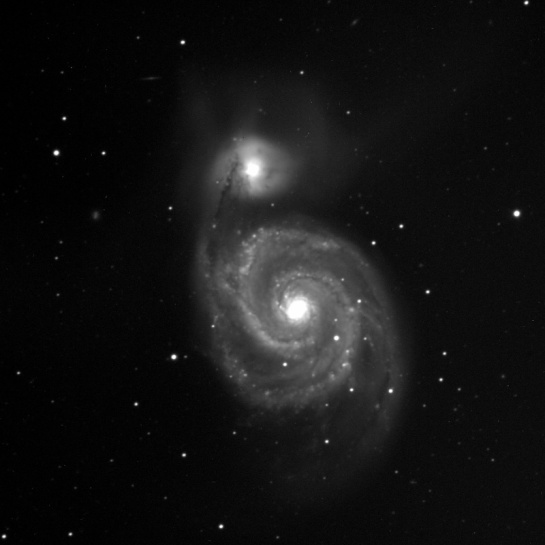 The Whirlpool Galaxy (M51) photographed on 20 April 2013 with the 61 cm Sierra Stars Observatory.

M51 is located just south of Alkaid, the eastern-most star in the “handle” of the Big Dipper (formally named Eta Ursae Majoris). It is relatively bright and can be located with binoculars on a dark, clear night.

Because this is actually two interacting galaxies, M51 has a lot of red star-forming areas similar to the giant molecular cloud in Orion in our galaxy. Some are visible in this image as faint “knots” of light along the spiral arms of the galaxy. I’ll try imaging the galaxy with colour filters soon. These separate images can then be combined with the monochrome images I’ve already taken to produce a colour rendering. There’s a nice write-up on M51 on Wikipedia at: http://en.wikipedia.org/wiki/Messier_51.

The Whirlpool Galaxy is quite far north in the sky, and just about doesn’t set from the perspective of southern Ontario. It will certainly be on my list to see and try to photography myself once the weather and my availability make it possible.