It’s been a long winter so far for me. Few opportunities to observe or photograph the night sky. Tonight – 17th February 2013 – it seemed that there was a shot at, well, some shots. It’s been clear all afternoon and evening. The moon is sitting spectacularly between Jupiter and the Pleiades, and Orion is just a few degrees to the west of that amazing sight – should be beautiful to see and lend itself to great shots for both camera and telescope. I’ve had my 80mm f/15 refractor on the balcony all afternoon on the EQ-4, and even got some nice shots of the sun this afternoon with it. Now it’s all cooled down and is at ambient temperature (important for telescopes), I’m wrapped up like a well-wrapped wrapper, and I’m all set for some lovely winter balcony-based astronomy.

And of course the clouds start to roll in from the north at 9:05 pm, just as the moon and stars of interest are swinging low enough in the horizon to work for me from the balcony. Not quite in position for the telescope. Whimper. I took a couple of quick hand-held shots for exposure. By the time I had a camera on a tripod the clouds were everywhere. 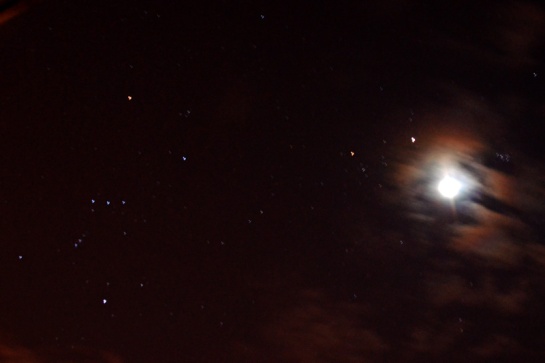 The moon and Orion – and Jupiter

Well, make lemonade, eh? Here’s one of the hand-held shots – still interesting – the moon is the brightest object, and you can see the bright cluster of stars just to the right – the Pleiades – peeking through the clouds. Jupiter is the bright object to the left and up from the moon. Due left of it is a bright yellow star, Aldebaran. The constellation Orion – the Hunter – lies off to the left. Another hour and a half until these things start to set behind the trees and Escarpment near by… maybe the clouds will part again at some point.

When the Apollo missions were heading to the moon the first mission priority, once the crew was safely down on the lunar surface and outside, was to collect a little bit of rock – the “contingency sample.” This was placed into a pocket, and if for some reason they had to leave in a hurry, well, they took something back with them. I guess this shot was my “contingency sample” for the evening.